You are here:
Home
>
Media
>
What Is Colonoscopy? 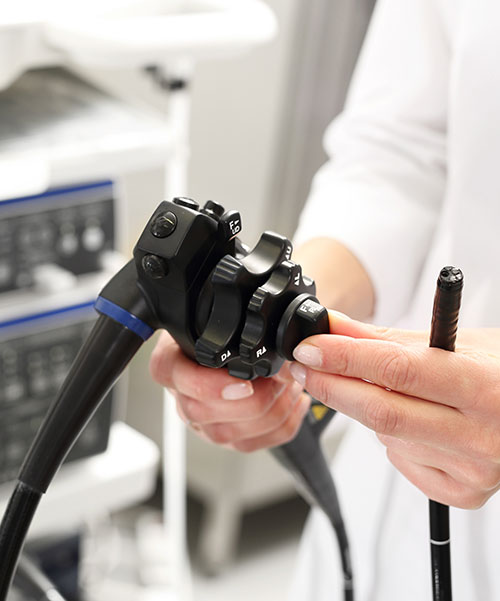 Colonoscopy is a procedure that is done to thoroughly examine the lining of the colon and rectum.

The colonoscope is a long flexible tube that is inserted via the anus and is advanced along the rectum and colon until it reaches the beginning of the colon. This tube carries a camera which allows the doctor to take a good look at the internal environment of the patient’s colon to detect any pathological changes. It also has channels allowing instruments to be inserted through them into the colon to remove polyps. Colonoscopy is the only technique among all the available tests for the colon (such as barium enema or CT colonoscopy) that allows for polyps to be removed.

Colonoscopy may be recommended if the patient has symptoms suggesting possible problems in the colon or rectum. These symptoms include bleeding, change in bowel habits and other unexplained abdominal symptoms. Colonoscopy is also useful in monitoring patients with inflammatory bowel disease, and for follow-up of patients with history of colon cancer or polyp. For colonoscopy and all other forms of examination of the colon, it is important to clear the colon of stools. Patients are asked to take very potent laxatives to clear the colon. In most cases, if the procedure is to be done in the morning, the patient will be asked to take the laxatives and purge the night before. If the procedure is to be done in the afternoon, it will be advisable to clear the bowels in the morning on the day of examination. Many patients have expressed that the preparation is the worst part of the entire procedure, since it is common to have to make multiple trips to the toilet after taking the medications to clean the colon. To prevent dehydration, patients are encouraged to drink as much fluids as possible while on laxatives in preparation for colonoscopy. Consumption of foods high in fibre, such as fruits and vegetables, is discouraged 2 days prior to examination. For patients who are on aspirin or other blood-thinning medications, the doctor will give appropriate advice on when those medications should be stopped. On the day of examination, it is important that the patient remains calm and relaxed. Most people are fearful of colonoscopy because they feel that it is a very invasive procedure and are concerned about pain. However, most patients do not feel any pain or even remember about the procedure after they wake up from sedation. It is also advisable to reach the Endoscopy Centre about 30 minutes to an hour ahead of the time of appointment in case a final trip to the toilet is required. Once inside the examination room, the doctor will likely administer a sedative by injection, though some patients may want to watch the procedure “live” and want to go through the entire procedure awake. This is possible as the procedure makes most people feel bloated and have the urge to pass motion rather than actual pain. Most people do not have any side effects after the procedure. Some people may feel bloated because of residual air left in the colon. Do remember that it is normal to have less bowel movement in the few days following the procedure because a lot of stools have already been cleared out by the bowel preparation. Colonoscopy is a generally safe investigative procedure when performed by a trained specialist. Current national guidelines recommend screening from the age of 50 years for early detection of colon cancer. However, it is known that colon cancer has a long pre-cancerous phase where it stays as a benign polyp (protuberance) for a number of years before turning cancerous. As such, screening to detect and remove polyps at an earlier age may actually prevent cancer instead of detecting early cancer which still requires surgery. Early detection of bowel malignancy is always beneficial, as it is the only proven way to improve prognosis and survival rates of cancer patients.